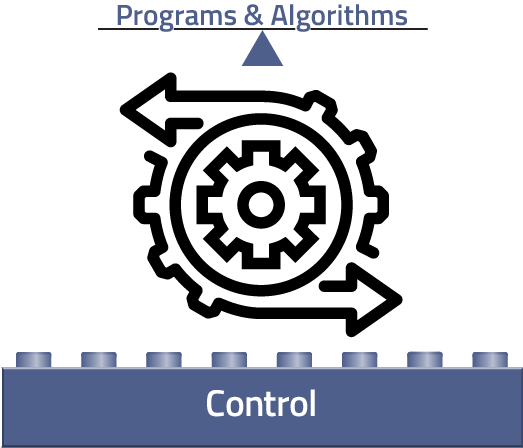 Earners demonstrate their understanding of control structures. Earners demonstrate how to effectively support students in learning sequential execution and simple control structures, including how to combine structures that support complex execution and that control structures specify the order in which instructions are executed within an algorithm or program. This micro-credential also asks earners to design and adapt learning experiences that align with comprehensive K-12 CS standards and plan activities that use evidence-based, CS-specific teaching strategies to develop students’ conceptual understanding and proactively address student misconceptions in CS.

Standards
How To Earn This Microcredential

To earn this micro-credential you will process through the ADDIE learning model producing evidence that demonstrates your knowledge of the Wyoming Computer Science Content and Performance Standards and the CSTA Standards for Teachers. Through the ADDIE learning model, you will analyze standards, design/develop and implement a lesson, collect student work artifacts, and evaluate your professional practices.

Fees
There will be no fee assessed for reviewing this microcredential.
Clarifications

A step-by-step process to complete a task.

A type of application software designed to run on a mobile device, such as a smartphone or tablet computer. Also known as a mobile application.

The teacher/earner can choose which grade band and standard to focus their lesson around.

Refers to all of the skills listed in the proficient level of the 2019 WY Computer Science Performance Standards (see in the resources) for the chosen standard.

Anything created by a human using a computational thinking process and a computing device. A computational artifact can be, but is not limited to, a program, image, audio, video, presentation, or web page file.

The study of computing principles, design, and applications (hardware & software); the creation, access, and use of information through algorithms and problem solving, and the impact of computing on society.

A feature of a programming language that performs different computations or actions depending on whether a programmer-specified Boolean condition evaluates to true or false. (A condition could refer to a conditional statement, conditional expression, or conditional construct.)

(in general) The power to direct the course of actions. (in programming) The use of elements of programming code to direct which actions take place and the order in which they take place.

A programming (code) structure that implements control. Conditionals and loops are examples of control structures.

Information that is collected and used for reference or analysis. Data can be digital or non-digital and can be in many forms, including numbers, text, a show of hands, images, sounds, or video.

To break down into components.

A programming structure that repeats a sequence of instructions as long as a specific condition is met.

The standards all students are expected to learn and be assessed on through the district assessment system by the end-of-the grade band (see 2019 WY Computer Science Performance Standards in the resources).

An early sample, model, or release of a product built to test a concept or process or to act as a thing to be replicated or learned from.

Scope refers to the topics and areas of development within a curriculum, and the sequence is the order in which those skills are taught.

All students are expected to be instructed on these CS standards, taught within the context of the performance standards. (see Micro-credential Map by Grade Band in the resources) If no supporting standards are listed on the map, this area is not applicable.

Tasks take place away from a computer in order to model key concepts.

A symbolic name used to keep track of a value that can change while a program is running. Variables are not just used for numbers; they can also hold text, including whole sentences (strings) or logical values (true or false). A variable has a data type and is associated with data storage location; its value is normally changed during the course of program execution.

Background Scenario / How This Will Help You

This micro-credential collection provides earners with the opportunity to document their knowledge and skills in teaching computer science to students in grades K–6. The content provides resources to support understanding.

Analyze: Standards This task requires an analysis of both computer science content standards and the CSTA Standards for Computer Science Teachers.

All instructions are included in the worksheet. Once you have completed the worksheet, upload it in the evidence section as a PDF. Google Docs Template: https://bit.ly/3ujQr4S

This lesson plan shows the planned instruction of your computer science focus standard.

All instructions are included in the worksheet. Once you have completed the worksheet, upload it in the evidence section as a PDF. Google Docs Template: https://bit.ly/3ummSzC

Implement the set of activities or lesson plan you designed.

Evaluate how effective your activities were at promoting student learning of the standards. Use specific examples from the artifacts you submitted in the Implement activity.

All instructions are included in the worksheet. Once you have completed the worksheet, upload it in the evidence section as a PDF. Google Docs Version:Template https://bit.ly/3J5Og8X

Evidence submissions and reflections will be reviewed for alignment with the assignment guidelines and this proficiency scale. Proficiency scale: https://bit.ly/3gnr7mi

This checklist will help you review your submission materials to ensure you address everything that is expected for this micro-credential. Checklist: https://bit.ly/3LjMBPk

Please provide a self-assessment, a score from 1–4, on each component of the proficiency scale found here: https://bit.ly/3gnr7mi. Provide a few sentences stating where the pieces of evidence that support the scores for each component are located.

If you are resubmitting, please indicate what changes were made in the documents (e.g., highlight, text color) and include "Resubmission #" with the resubmission number in the file title when you upload.

Content knowledge – The teacher demonstrates accurate and complete knowledge of the content and skills of the standard being taught. (CSTA 4a)

Inform instruction through assessment – The teacher develops multiple forms and modalities of assessment to provide feedback and support. The teacher uses resulting data for instructional decision-making and differentiation. (CSTA 4g)

Supporting standards The teacher identifies and explains the connection of supporting computer science standards to the standard being taught in their lesson.

Vertical alignment – The teacher explains the relationship of the standard in the scope and sequence of computer science standards directly above and below chosen grade band. (CSTA 4b)

Plan projects that have personal meaning to students - Plan opportunities for students to create and share open-ended and personally meaningful projects. (CSTA 4e)

Use inquiry to facilitate student learning - Use inquiry-based learning to enhance student understanding of CS content. (CSTA 5a)

Lessons aligned to each CS Standard for grades K-2.

Lessons aligned to each CS Standard for grades 3 -5

Coders use the repeat block to repeat a silly dance for Scratch Cat using motion blocks. This project aims to introduce young coders to repeating algorithmic sequences in ScratchJr.

Students experiment with using loops and variables to create representations of fractions in Scratch.


Computer Science in K-12: An A to Z Handbook on Teaching Programming - Q: Questions and Inquiry (Paid Resource)
https://amzn.to/3sCaM45


Computer Science in K-12: An A to Z Handbook on Teaching Programming - R: Repetition and recursion (Paid Resource)
https://amzn.to/3sCaM45

This lesson merges computer science into the real world by building on their ability to tell if a condition is true or false. Students will learn to use if statements to declare when a certain command should be run, as well as if / else statements to declare when a command should be run and what to run otherwise. Students may not recognize the word conditionals, but most students will understand the idea of using "if" to make sure that some action only occurs when it is supposed to.

Engagement Practices are evidence-based teaching practices that faculty can use to help broaden participation in computing.

This brief article describes five benefits that elementary teachers identified for integrating CT into their math instruction (via Scratch programming). There is some jargon but mostly it is easy to read. It also has some useful examples. (CSTA 4e)


How to Code a Roller Coaster (Paid Resource)
https://amzn.to/3pzoouS

This children's book tells a story of a girl coding a robot to build a rollercoaster to introduce variables and if-then-else sequences.


How to Code a Sandcastle (Paid Resource)
https://amzn.to/35qwGhV

This children's book tells a story of a girl coding a robot to build a sandcastle to introduce code, sequencing, loops, and decomposition.

Students use rounding rules to think about how to write conditionals.

In computer programming, loops are used to repeat a sequence of code multiple times. Loops are a key computational concept that can simplify students’ code, making it easier for students to read and debug their work. In this project, students explore loops through the repeat, repeat until or forever blocks, which can make things happen more than one time

This article highlights some benefits of bringing codable robots into math instruction (different than the ones in the article above). It also gives a few activity examples and a process for how teachers might think about developing a lesson. There are elements in this resource that could support thinking about authentic tasks and debugging processes.

This lesson teaches students how to code various real-life events in a simulation of a starry night. Students will use graphical programming blocks in Scratch Jr and create algorithms to tell the characters what to do.

Article discussion how computer science is best integrated across content areas by teaching design and inquiry practices in tandem with CS.

Unplugged lesson learn to distinguish events and actions. The students will see activities interrupted by having a "button" pressed on a paper remote. When seeing this event, the class will react with a unique action. Events are widely used in programming and should be easily recognizable after this lesson.

This song teaches the importance of loops in computer science. Loops make your coding more efficient and can save you time.


Video: What are Loops? Coding for Kids
https://docs.google.com/document/d/1gHN4kvjxAgPEfKhX1eIERUWKnfsCTzxR0Oz99A9Uqss/edit

Video explaining loops in our everyday lives and demonstrating how they are done in programming.


Write and If- Then Adventure Story
https://docs.google.com/document/d/1gHN4kvjxAgPEfKhX1eIERUWKnfsCTzxR0Oz99A9Uqss/edit

Teach students about conditionals by having them create an interactive If-Th3n Adventure story in Google Slides.